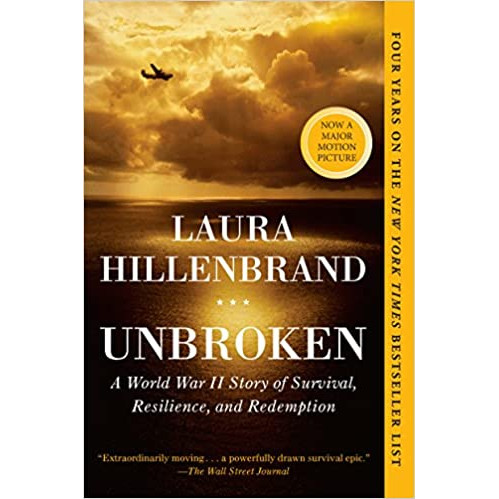 “Extraordinarily moving . . . a powerfully drawn survival epic.”
— The Wall Street Journal
“[A] one-in-a-billion story . . . designed to wrench from self-respecting critics all the blurby adjectives we normally try to avoid: It is amazing, unforgettable, gripping, harrowing, chilling, and inspiring.”
— New York
“Staggering . . . mesmerizing . . . Hillenbrand’s writing is so ferociously cinematic, the events she describes so incredible, you don’t dare take your eyes off the page.”
— People
“A meticulous, soaring and beautifully written account of an extraordinary life.”
— The Washington Post
“Ambitious and powerful . . . a startling narrative and an inspirational book.”
— The New York Times Book Review
“Marvelous . . . Unbroken is wonderful twice over, for the tale it tells and for the way it’s told. . . . It manages maximum velocity with no loss of subtlety.”
— Newsweek
“Moving and, yes, inspirational . . . [Laura] Hillenbrand’s unforgettable book . . . deserve[s] pride of place alongside the best works of literature that chart the complications and the hard-won triumphs of so-called ordinary Americans and their extraordinary time.”
— Maureen Corrigan, Fresh Air
“Hillenbrand . . . tells [this] story with cool elegance but at a thrilling sprinter’s pace.”
— Time
“Unbroken is too much book to hope for: a hellride of a story in the grip of the one writer who can handle it. . . . When it comes to courage, charisma, and impossible adventure, few will ever match ‘the boy terror of Torrance,’ and few but the author of Seabiscuit could tell his tale with such humanity and dexterity. Hillenbrand has given us a new national treasure.”
— Christopher McDougall, author of Born to Run
“Riveting . . . an exceptional portrait . . . So haunting and so beautifully written, those who fall under its spell will never again feel the same way about World War II and one of its previously unsung heroes.”
— The Columbus Dispatch
“Magnificent . . . incredible . . . [Hillenbrand] has crafted another masterful blend of sports, history and overcoming terrific odds; this is biography taken to the nth degree, a chronicle of a remarkable life lived through extraordinary times.”
— The Dallas Morning News
“No other author of narrative nonfiction chooses her subjects with greater discrimination or renders them with more discipline and commitment. If storytelling were an Olympic event, [Hillenbrand would] medal for sure.”
— Salon
“A celebration of gargantuan fortitude . . . full of unforgettable characters, multi-hanky moments and wild turns . . . Hillenbrand is a muscular, dynamic storyteller.”
— The New York Times
“[A] masterfully told true story . . . nothing less than a marvel.”
— Washingtonian
“Zamperini’s story is certainly one of the most remarkable survival tales ever recorded. What happened after that is equally remarkable.”
— Graydon Carter, Vanity Fair
“Irresistible . . . Hillenbrand demonstrates a dazzling ability
— one Seabiscuit only hinted at
— to make the tale leap off the page.”
— Elle
“A tale of triumph and redemption . . . astonishingly detailed.”
— O: The Oprah Magazine
“An astonishing testament to the superhuman power of tenacity.”
— Entertainment Weekly
“Intense . . . You better hold onto the reins.”
— The Boston Globe
“Incredible . . . Zamperini’s life is one of courage, heroism, humility and unflagging endurance.”
— St. Louis Post Dispatch
“Hillenbrand has once again brought to life the true story of a forgotten hero, and reminded us how lucky we are to have her, one of our best writers of narrative history. You don’t have to be a sports fan or a war-history buff to devour this book
— you just have to love great storytelling.”
— Rebecca Skloot, author of The Immortal Life of Henrietta Lacks

Laura Hillenbrand is the author of the #1 New York Times bestseller Seabiscuit: An American Legend, which was a finalist for the National Book Critics Circle Award, won the Book Sense Book of the Year Award and the William Hill Sports Book of the Year Award, landed on more than fifteen best-of-the-year lists, and inspired the film Seabiscuit, which was nominated for seven Academy Awards, including Best Picture. Hillenbrand’s New Yorker article,
“A Sudden Illness,” won the 2004 National Magazine Award, and she is a two-time winner of the Eclipse Award, the highest journalistic honor in Thoroughbred racing. She and actor Gary Sinise are the co-founders of Operation International Children, a charity that provides school supplies to children through American troops. She lives in Washington, D.C.