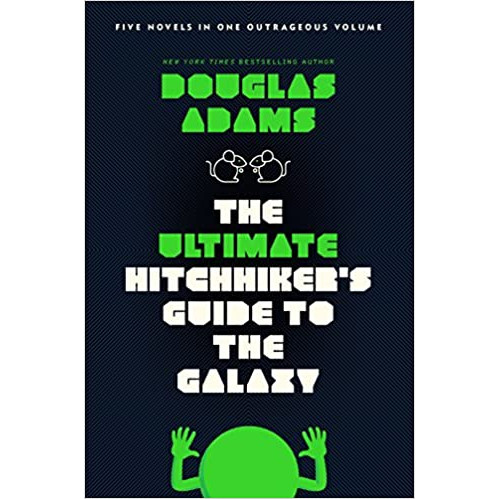 The Ultimate Hitchhiker’s Guide to the Galaxy (Pasta blanda)

At last in paperback in one complete volume, here are the five classic novels from Douglas Adams's beloved Hitchiker series. "The Hitchhiker's Guide to the GalaxySeconds before the Earth is demolished for a galactic freeway, Arthur Dent is saved by Ford Prefect, a researcher for the revised "Guide. Together they stick out their thumbs to the stars and begin a wild journey through time and space. "The Restaurant at the End of the UniverseFacing annihilation at the hands of warmongers is a curious time to crave tea. It could only happen to the cosmically displaced Arthur Dent and his comrades as they hurtle across the galaxy in a desperate search for a place to eat. "Life, the Universe and EverythingThe unhappy inhabitants of planet Krikkit are sick of looking at the night sky- so they plan to destroy it. The universe, that is. Now only five individuals can avert Armageddon: mild-mannered Arthur Dent and his stalwart crew. "So Long, and Thanks for All the FishBack on Earth, Arthur Dent is ready to believe that the past eight years were all just a figment of his stressed-out imagination. But a gift-wrapped fishbowl with a cryptic inscription conspires to thrust him back to reality. So to speak. "Mostly HarmlessJust when Arthur Dent makes the terrible mistake of starting to enjoy life, all hell breaks loose. Can he save the Earth from total obliteration? Can he save the "Guide from a hostile alien takeover? Can he save his daughter from herself?

Douglas Adams was born in 1952 and educated at Cambridge. He was the author of five books in the Hitchhiker’s Trilogy, including The Hitchhiker’s Guide to the Galaxy; The Restaurant at the End of the Universe; Life, the Universe and Everything; So Long, and Thanks for All the Fish; and Mostly Harmless. His other works include Dirk Gently’s Holistic Detective Agency; The Long Dark Tea-Time of the Soul; The Meaning of Liff and The Deeper Meaning of Liff (with John Lloyd); and Last Chance to See (with Mark Carwardine). His last book was the bestselling collection, The Salmon of Doubt, published posthumously in May 2002.