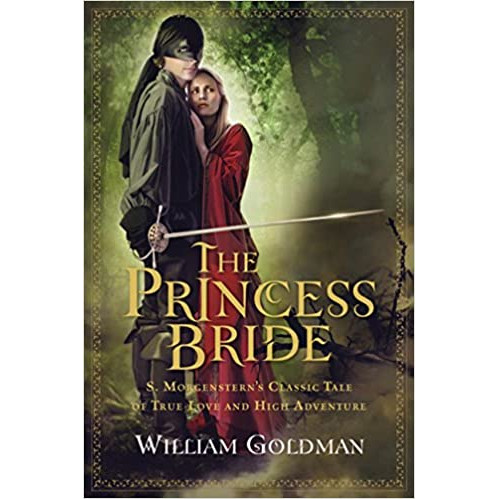 PRAISE FOR THE PRINCESS BRIDE "[Goldman's] swashbuckling fable is nutball funny . . . A 'classic' medieval melodrama that sounds like all the Saturday serials you ever saw feverishly reworked by the Marx Brothers." --Newsweek "One of the funniest, most original, and deeply moving novels I have read in a long time." --Los Angeles Times

What happens when the most beautiful girl in the world marries the handsomest prince of all time and he turns out to be...well...a lot less than the man of her dreams? As a boy, William Goldman claims, he loved to hear his father read the "S. Morgenstern classic, The Princess Bride. But as a grown-up he discovered that the boring parts were left out of good old Dad's recitation, and only the "good parts" reached his ears. Now Goldman does Dad one better. He's reconstructed the "Good Parts Version" to delight wise kids and wide-eyed grownups everywhere. What's it about? Fencing. Fighting. True Love. Strong Hate. Harsh Revenge. A Few Giants. Lots of Bad Men. Lots of Good Men. Five or Six Beautiful Women. Beasties Monstrous and Gentle. Some Swell Escapes and Captures. Death, Lies, Truth, Miracles, and a Little Sex. In short, it's about everything. Eventually to be adapted for the silver screen, THE PRINCESS BRIDE was originally a beautifully simple, insightfully comic story of what happens when the most beautiful girl in the world marries the handsomest prince in the world--and he turnsout to be a son of a bitch. Guaranteed to entertain both young and old alike by combining scenes of rowsing fantasy with hilarious reality, THE PRINCESS BRIDE secures Goldman's place as a master storyteller. "From the Paperback edition.

A tale of true love and high adventure, pirates, princesses, giants, miracles, fencing, and a frightening assortment of wild beasts--The Princess Bride is a modern storytelling classic.As Florin and Guilder teeter on the verge of war, the reluctant Princess Buttercup is devastated by the loss of her true love, kidnapped by a mercenary and his henchman, rescued by a pirate, forced to marry Prince Humperdinck, and rescued once again by the very crew who absconded with her in the first place. In the course of this dazzling adventure, she'll meet Vizzini--the criminal philosopher who'll do anything for a bag of gold; Fezzik--the gentle giant; Inigo--the Spaniard whose steel thirsts for revenge; and Count Rugen--the evil mastermind behind it all. Foiling all their plans and jumping into their stories is Westley, Princess Buttercups one true love and a very good friend of a very dangerous pirate. William Goldman has been writing books and movies for more than forty years. He has won two Academy Awards (one for Butch Cassidy and the Sundance Kid and one for All the President's Men), and three Lifetime Achievement awards in screenwriting.

WILLIAM GOLDMAN (1931-2018) wrote books and movies for more than fifty years. He won two Academy Awards (for Butch Cassidy and the Sundance Kid and All the President's Men), and three Lifetime Achievement Awards in screenwriting.