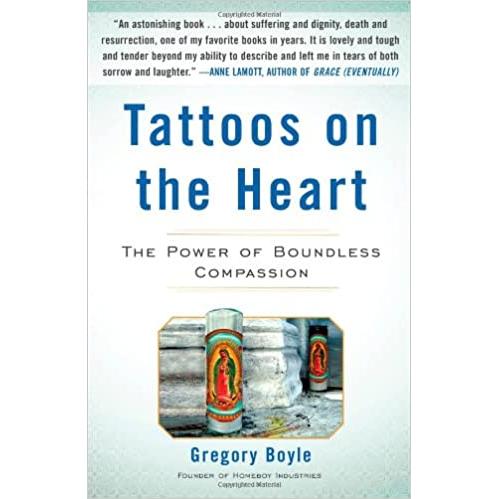 Tattoos on the Heart: The Power of Boundless Compassion (Pasta dura)

Starred Review. In this artful, disquieting, yet surprisingly jubilant memoir, Jesuit priest Boyle recounts his two decades of working with homies in Los Angeles County, which contains 1,100 gangs with nearly 86,000 members. Boyle's Homeboy Industries is the largest gang intervention program in the country, offering job training, tattoo removal, and employment to members of enemy gangs. Effectively straddling the debate regarding where the responsibility for urban violence lies, Boyle both recounts the despair of watching the kids you love cooperate in their own demise and levels the challenge to readers to stand in awe at what the poor have to carry rather than stand in judgment at how they carry it. From moving vignettes about gangsters breaking into tears or finding themselves worthy of love and affirmation, to moments of spiritual reflection and sidesplittingly funny banter between him and the homies, Boyle creates a convincing and even joyful treatise on the sacredness of every life. Considering that he has buried more than 150 young people from gang-related violence, the joyful tenor of the book remains an astounding literary and spiritual feat. (Mar.) Copyright © Reed Business Information, a division of Reed Elsevier Inc. All rights reserved.

“Destined to become a classic of both urban reportage and contemporary spirituality.”
— The Los Angeles Times "An astonishing book . . . about suffering and dignity, death and resurrection, one of my favorite books in years. It is lovely and tough and tender beyond my ability to describe and left me in tears of both sorrow and laughter."
— ANNE LAMOTT, AUTHOR OF GRACE (EVENTUALLY)"One of the bravest, most humane, heartbreaking, brilliant, and hopeful stories I’ve read in ages. Father Greg, the Gandhi of the Gangs, fills Tattoos with unquenchable soul force and down-to-earth love."
— JACK KORNFIELD, AUTHOR OF A PATH WITH HEART"Father Boyle reminds us all that every single child and youth is a part of God’s ‘jurisdiction’
— and when they know that we are seeing them as God does, they are capable of great things. Father Boyle is a national treasure."
— MARIAN WRIGHT EDELMAN, PRESIDENT, CHILDREN’S DEFENSE FUND"Sometimes we are allowed to see in our own lifetimes what we were supposed to see in the life and ministry of Jesus. Read, and let your life be changed!"
— FATHER RICHARD ROHR, O.F.M., CENTER FOR ACTION AND CONTEMPLATION, ALBUQUERQUE, NEW MEXICO"Tattoos on the Heart is an astounding book and a remarkable testament. No one brings more triumph and tragedy to the street gang story than Greg Boyle. No one brings more conviction and compassion than Greg Boyle. And no one writes the gang story more beautifully."
— MALCOLM KLEIN, PROFESSOR EMERITUS, UNIVERSITY OF SOUTHERN CALIFORNIA"A spiritual masterpiece touching the innermost sanctum of the human soul. Boyle approaches each person as a child of God and fully deserving of love and compassion. His capacity to reach the heart of the most hardened, and to see the best in everyone, inspires. I laughed, wept, and underlined on virtually every page."
— KERRY KENNEDY, FOUNDER OF THE RFK CENTER FOR JUSTICE AND HUMAN RIGHTS"An extraordinary reflection of a life totally committed to reshaping and redirecting the lives of countless young gang members (from L.A.’s gang culture), Greg Boyle’s Tattoos on the Heart proves one man with courage is a majority."
— MARTIN SHEEN"Tattoos on the Heart is an honest, raw, and compelling collection from Father Greg Boyle’s life and work with gang-involved youth. His commitment should teach us all a lesson in compromise, sharing, learning, loving, and, most important, living life to the fullest."
— ANJELICA HUSTON"Incandescent, always hope-filled and often hilarious. Boyle somehow maintains an exuberant voice that celebrates the strength, compassion and humanity of people often demonized. He simply highlights charity and goodness wherever they are found. Boyle intersperses his narratives about gang members and his work with them with theological and spiritual reflections from a variety of theologians, poets and other writers. By introducing book-buying, highly educated readers to people we may never otherwise encounter, Boyle aspires to "broaden the parameters of our kinship.'"--The Christian Century

Gregory Boyle is the founder of Homeboy Industries in Los Angeles, CA. Now in its 30th year, Homeboy traces its roots to when Boyle, a Jesuit priest with advanced degrees in English and theology, served as pastor of Dolores Mission Church, then the poorest Catholic parish in Los Angeles, which also had the highest concentration of gang activity in the city. Homeboy has become the largest gang-intervention, rehabilitation, and reentry program in the world, and employs and trains gang members and felons in a range of social enterprises, as well as provides critical services to thousands of men and women each year who walk through its doors seeking a better life. Father Boyle has received the California Peace Prize, the James Beard Foundation Humanitarian of the Year Award, and the University of Notre Dame’s Laetare Medal. He was inducted into the California Hall of Fame and named a 2014 Champion of Change by the White House. He is also the author of the New York Times bestseller Tattoos on the Heart: The Power of Boundless Compassion.