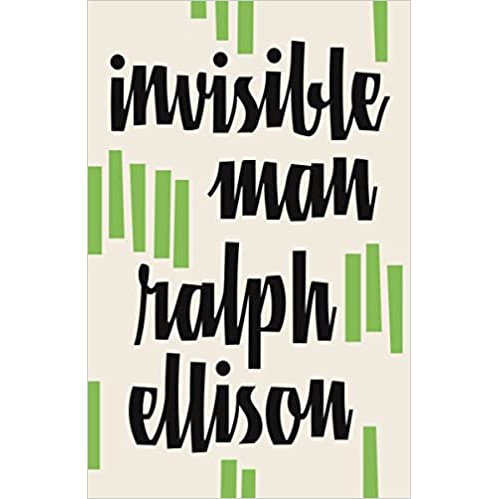 We rely, in this world, on the visual aspects of humanity as a means of learning who we are. This, Ralph Ellison argues convincingly, is a dangerous habit. A classic from the moment it first appeared in 1952, Invisible Man chronicles the travels of its narrator, a young, nameless black man, as he moves through the hellish levels of American intolerance and cultural blindness. Searching for a context in which to know himself, he exists in a very peculiar state. "I am an invisible man," he says in his prologue. "When they approach me they see only my surroundings, themselves, or figments of their imagination--indeed, everything and anything except me." But this is hard-won self-knowledge, earned over the course of many years. As the book gets started, the narrator is expelled from his Southern Negro college for inadvertently showing a white trustee the reality of black life in the south, including an incestuous farmer and a rural whorehouse. The college director chastises him: "Why, the dumbest black bastard in the cotton patch knows that the only way to please a white man is to tell him a lie! What kind of an education are you getting around here?" Mystified, the narrator moves north to New York City, where the truth, at least as he perceives it, is dealt another blow when he learns that his former headmaster's recommendation letters are, in fact, letters of condemnation. What ensues is a search for what truth actually is, which proves to be supremely elusive. The narrator becomes a spokesman for a mixed-race band of social activists called "The Brotherhood" and believes he is fighting for equality. Once again, he realizes he's been duped into believing what he thought was the truth, when in fact it is only another variation. Of the Brothers, he eventually discerns: "They were blind, bat blind, moving only by the echoed sounds of their voices. And because they were blind they would destroy themselves.... Here I thought they accepted me because they felt that color made no difference, when in reality it made no difference because they didn't see either color or men." Invisible Man is certainly a book about race in America, and sadly enough, few of the problems it chronicles have disappeared even now. But Ellison's first novel transcends such a narrow definition. It's also a book about the human race stumbling down the path to identity, challenged and successful to varying degrees. None of us can ever be sure of the truth beyond ourselves, and possibly not even there. The world is a tricky place, and no one knows this better than the invisible man, who leaves us with these chilling, provocative words: "And it is this which frightens me: Who knows but that, on the lower frequencies, I speak for you?" --Melanie Rehak

These three volumes have been redesigned and reissued to commemorate the first anniversary of Ellison's death. Copyright 1995 Reed Business Information, Inc.

"A book of the very first order, a superb book."
— Saul Bellow

Invisible Man is a milestone in American literature, a book that has continued to engage readers since its appearance in 1952. A first novel by an unknown writer, it remained on the bestseller list for sixteen weeks, won the National Book Award for fiction, and established Ralph Ellison as one of the key writers of the century. The nameless narrator of the novel describes growing up in a black community in the South, attending a Negro college from which he is expelled, moving to New York and becoming the chief spokesman of the Harlem branch of "the Brotherhood," and retreating amid violence and confusion to the basement lair of the Invisible Man he imagines himself to be. The book is a passionate and witty tour de force of style, strongly influenced by T.S. Eliot's The Waste Land, Joyce, and Dostoevsky.

Ralph Ellison was born in Okalahoma and trained as a musician at Tuskegee Institute from 1933 to 1936, at which time a visit to New York and a meeting with Richard Wright led to his first attempts at fiction. Invisible Man won the National Book Award and the Russwurm Award. Appointed to the Academy of American Arts and Letters in 1964, Ellison taught at many colleges including Bard College, the University of Chicago, and New York University where he was Albert Schweitzer Professor of Humanities from 1970 through 1980. Ralph Ellison died in 1994.