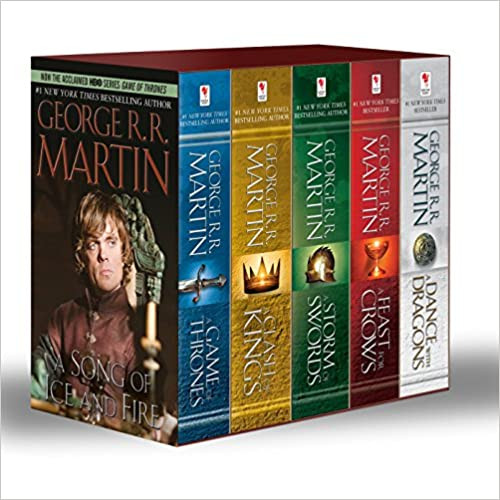 The Chronicles of Narnia (Pasta blanda)

Praise for George R. R. Martin and A Song of Ice and Fire
“The only fantasy series I’d put on a level with J.R.R. Tolkien’s The Lord of the Rings . . . It’s a fantasy series for hip, smart people, even those who don’t read fantasy.”
— Chicago Tribune
“Martin amply fulfills the first volume’s promise and continues what seems destined to be one of the best fantasy series ever written.”
— The Denver Post, on A Clash of Kings
“Martin has produced
— is producing, since the series isn’t over
— the great fantasy epic of our era. It’s an epic for a more profane, more jaded, more ambivalent age than the one Tolkien lived in.”
— Lev Grossman, Time
“Addictive . . . George R. R. Martin has created the unlikely genre of the realpolitik fantasy novel.”
— Rolling Stone, on A Feast for Crows
“Epic fantasy as it should be written: passionate, compelling, convincingly detailed and thoroughly imagined.”
— The Washington Post, on A Dance with Dragons
“I always expect the best from George R. R. Martin, and he always delivers.”
— Robert Jordan

George R. R. Martin is the #1 New York Times bestselling author of many novels, including the acclaimed series A Song of Ice and Fire
— A Game of Thrones, A Clash of Kings, A Storm of Swords, A Feast for Crows, and A Dance with Dragons. As a writer-producer, he has worked on The Twilight Zone, Beauty and the Beast, and various feature films and pilots that were never made. He lives with the lovely Parris in Santa Fe, New Mexico.